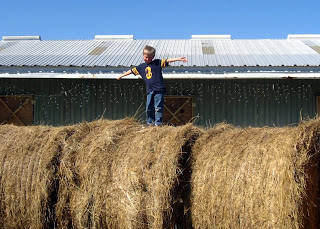 We’ll take about 150 rolls and make a hay maze for the kids to play in. We’ve done this several times and the kids really love it and it’s a big hit at the Halloween party. I came up with some names for the hay maze — how about “hayze”? Ok, what about “haytrix”? That’s all I could come up for names. A Hayze or Haytrix is time consuming to design and put together, but it’s worth it. Even in the early stages it’s fun. Here’s Noah hamming it up. 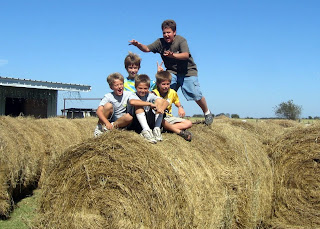 Benjamin and Zachary are over for a visit. Looks like Russell is about to pounce. 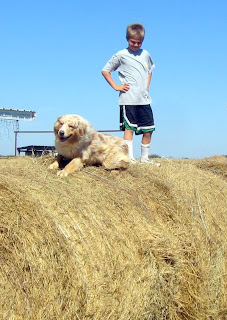 Red even jumped up on top of the bales. He didn’t stay up there for long. The bales are about 5ft tall by 5ft wide.

The problem with the certified organic label is it allows for lots of loopholes. Consumers can’t be sure they’re getting what they imagine. It’s best to know exactly where your food comes from. Now the USDA has issued some new guidelines on what can be called “grassfed”. The American Grassfed Association is against the new grassfed standards. I’m a member of the American Grassfed Association and I’m sure I support them in this. We raise our animals to the highest possible standard, so we’re in favor of enforcing only the highest standards. I don’t want there to be any loopholes in this. When consumers buy something called “grassfed” they should get exactly what they expect. Here’s a link to the press release.

The American Grassfed Association is against the new grassfed standards. I’m a member of the American Grassfed Association and I’m sure I support them in this. We raise our animals to the highest possible standard, so we’re in favor of enforcing only the highest standards. I don’t want there to be any loopholes in this. When consumers buy something called “grassfed” they should get exactly what they expect. Here’s a link to the press release.

Here’s a great blog entry from “Sooz” in Texas spelling out the reasons why we should buy food from sustainable sources. I couldn’t agree more. I especially agree that the meat just tastes better.

I don’t know Laura from the Urbanhennery, but I found her blog and read her entry about the benefits of grass-fed beef. It was so well written I wanted to link to it, so here it is. Like Laura says: “So if you’re going to choose to eat beef (and really don’t all of us omnivor’s like a good steak once in a while?) choose 100% grass fed beef. It’s better for you, the cow and the environment.”

Yeah that’s kind of a cool concept. A microwave looking thing that just creates whatever food you want. But according to this article, we’ve become addicted to corn.

“Cheap corn gave us the cheap hamburger, as well. Corn, a high-starch feed, fast-fattens cattle; it’s now the main ingredient in the bovine feedlot diet. Americans have a weak-spot for corn-fed beef, which has as much as five times saturated fat as grass-fed beef. In fact, if you were born in the last thirty years in America, chances are you’ve only ever eaten corn-fed beef. So it goes: the seemingly diverse foods in the supermarket — can of soda, disc of beef — have common ancestors in the Corn Belt.

“Star Trek’s Replicator is an understandably appealing idea. As a kid I would have traded my little sister for a machine that would make hamburgers appear from thin air in my bedroom. But are consumers benefiting from the corn kingdom? Obesity rates are obscenely high, and one in three kids born in 2000 is expected to develop Type-II diabetes. It would be absurd to lay the blame solely with corn, but the nation’s waistline problems are undoubtedly linked to what we’re gulping down at the local fast food joint. And most of that stuff, despite all the shapes and colors it comes in, is made out of the same varietal of goo — yellow dent #2 corn. “

This is what they say at the Indianapolis Star. Check it out here. By the way I agree, go with the free-range, grassfed beef that was raised on grass free from chemicals and pesticides and raised with no hormones.

Do you know what an Ethicurean is? I didn’t either until I read this article about the new “Grassfed” label rules that have been issued by the USDA. Read this to see what ethicureans think of the new label. Here’s a paragraph:

“Exciting announcement for Ethicurean readers: After almost five years of deliberation and two rounds of public comments, the USDAs Agricultural Marketing Service (AMS) has finally issued standards for “grass (forage) fed” marketing claims” ones that actually mean what most consumers think they should mean, and aren’t chock full of industry-pandering loopholes as we feared they would be.”

This article is an eye-opening look at how some of the major conglomerates move behind the scenes to lobby for changes in the legal definitions of “organic products” and “pasteurization”. I know why they do these things and I’m not suggesting a sinister motive. I just know that raising chickens and cattle that are really “free-range” and really “grass-fed” like any regular person understands that terminology is prohibitively expensive. You can’t make a large profit doing it. Until a larger percentage of people demand it, it won’t happen. I think the movement is happening.