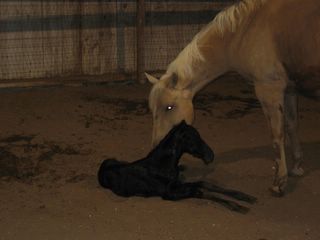 Lacey our 5 year old Palomino mare finally had her baby. The foal’s sire is Coins for Cash, a black Quarterhorse stallion. Lacey’s registered name is An Afternoon Tradition. It’s a little filly. So now we have to figure out what to name the baby. These registered horses have a registered name that usually incorporates some aspect of the mother and father. Then, they have the name they are called. Strange but that’s how they do it. We’re taking nominations. So far I’ve suggested Traditional Cash. 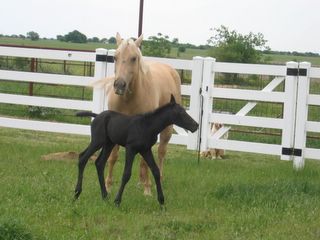 The baby was born on April 23rd. Here it is a few weeks later. We have some concerns about her legs. The front left knee seems to be bent in a little. Vet says not to worry.