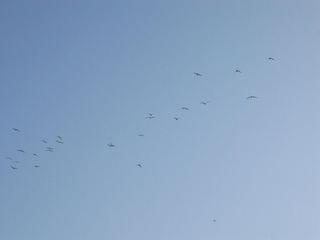 Zoom in on this picture if you can and you’ll see that these are Sea Gulls. I’ve never seen a flock of Sea Gulls around here. I didn’t think Gulls were migratory, but maybe they are. We’re a couple hundred miles from the coast. Before I saw them, I heard them — the unmistakable Sea Gull calls were actually quite loud. I expected to hear waves crashing on the beach next. But then I saw them coming right over me. It took me a moment to get the camera out and turned on. The above picture is the best I could get.

Not more than 10 minutes later some actual ducks flew over in the typical V shape making normal duck noises. 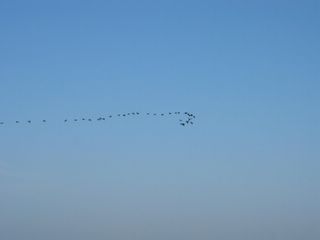 We see ducks flying north every day. Some of them land in our ponds for a little rest. But Sea Gulls?