Well,it’s mechanical, but mechanical doesn’t mean it’s not natural. We practice rotational grazing and try not to overgraze our pastures. The cows themselves do the best job of fertilizing. But cows are not perfect grazers, they pick and choose and they aren’t great at weed control. We don’t use chemical weed control, so that’s where the mowing comes in. A lot of people tell me that mowing is one of the most expensive things you can do from a labor and equipment cost/depreciation standpoint. And they’re right about that — it’s costly. Chemicals are much more efficient and cost effective, they say. But who knows the cost of chemicals in the long run? We like the results we get by mowing, and in so doing, no chemicals are needed. 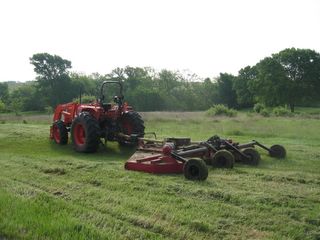 This morning it was time to do some soil building. Yeah, when we mow down these pastures, really what we’re doing is replenishing soils and building them up organically so they can support healthier grass and other growth which in turn supports more cattle, which in turn feed people.

Mowing pastures has been our best method for controlling weeds too. A good healthy diversity of grasses, some cool season grasses and some warm season grasses is an ideal mix. Most of the mowing is done with this Bushhog 15′ Batwing mower. It is really awesome how much stuff it can shred up and return as mulch to the soil. And the pastures look a lot nicer when they’re mowed. Almost looks like a park out there. Plus, the resulting growth is much more palatable to the cattle. They don’t like real tall, overly woody stems of plants. They like the nice tender shoots. Imagine eating really tall asparagus as opposed to new growth — a big difference in taste.

Another interesting thing about mowing is that it draws the attention of the hawks. It never fails that when I’m out mowing, one or two hawks are out there with me. They seem to have learned that mowing stirs up rabbits and field mice. I love watching the hawks flying around looking for prey. Not that I don’t love the bunnies and mice, I do, but it’s just nature and predatory animals contributing to the balance of life. I never want to run over a rabbit. When I stir one up and it takes off running, I always root for it to get out of the way of the mower and I’ll stop if they just can’t seem to make it fast enough. But the hawks are something else. Just this morning I was out mowing and saw two instances where a hawk caught a mouse within 20 feet of the tractor. It was something to watch. The most spectacular one to watch was the second of the two. In this case, I had just mowed over a large patch of prickly pear cactus. The prickly pear cactus patch is the favorite habitat seemingly for the field mice. And when they hear me coming they scurry for cover. This one pass around I saw one running/hopping away from the tractor. I turned back over my right shoulder to one of the tall trees where I had seen a hawk earlier, but that tree was now a good 250 yards behind me. Just as I turned back to see if the hawk was maybe watching all of this and wondering if the hawk might be able to see this little mouse running away, wouldn’t you know it but out of the tree flashes the big bird. It seemed to flap its wings only a few times and then just held those wings out in a wide span and bore down on its prey. I couldn’t believe I was witnessing this whole thing from start to finish. Meanwhile, the tractor was roaring at max power, with a giant 15′ mower reducing everything in its path to shreds of organic material. Nothing quiet about that process, let me tell you. No matter to this hawk, who was focused entirely on the escaping breakfast. Sure enough it swooped in on the unsuspecting mouse and in very short order snatched it with its claws and flew off to another tree. Amazing stuff. All I could say was Wow. Of course, I couldn’t get a shot of all that with my digital camera. Must move quicker next time! 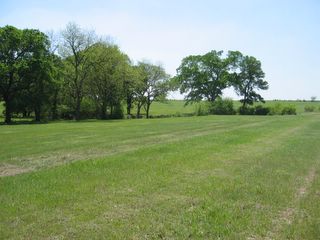 Doesn’t it look at lot nicer after mowing? 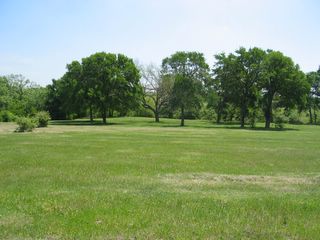 Makes you want to have a picnic doesn’t it?