We thought this past Labor Day would be a perfect time to go out an round up all the cattle and have a look at them closeup and personal. When we round them up we usually bring them into a set of corrals (pens) up by the main barns and separate them into various groups. The Mamas go in a group, the little babies stay with them, the older babies that are ready to be weaned go in another group and the bulls go in another. SteakBurger candidates go in a whole ‘nother group.

Rounding up cattle can be done using a lot of different approaches. We’ve done it on horseback, on foot and then the most effective method by far is by four wheeler. One or two people can round up all the cattle in a very short time, especially our cows, using four wheelers. We don’t rush them, we don’t yell at them, we usually just call to them from ahead and follow them up at the rear. They are used to the process and usually in short order they’re all penned up. But that doesn’t mean we don’t invite whoever wants to participate to join in on the fun. Unexpected things happen all of the time and this was no exception. Read on and you’ll see why I said it takes a village to run this place. 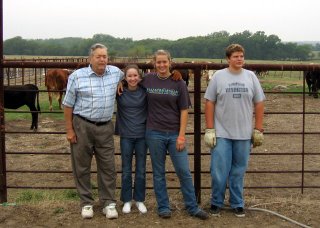 This is my Uncle Norrie from Prescott, AZ with Tess Clark from Italy, Rebecca and Eric. Uncle Norrie had stopped by with my Aunt Donna to visit my Mom and Dad on their way back home after serving a mission in rural Illinois. Of course my Mom’s family (the Busby’s of Tucson, AZ) had been involved in the meat business back in the day owning a meat packing plant there and Uncle Norrie in years past had been heavily involved in ranching himself. So they were no strangers to the cattle business. But I’m sure they weren’t prepared for our methods of roundup! 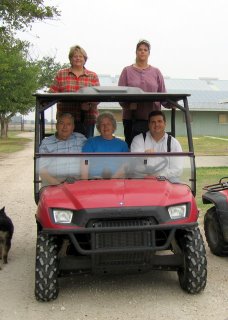 Here’s the best tool for rounding up cattle. The Ranger. This time we had it loaded up pretty good with yours truly at the wheel, Aunt Donna and Uncle Norrie in front with me and my sisters Cheryl and Evelyn along for the ride in the back. 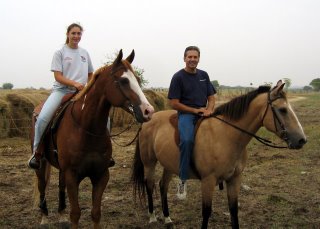 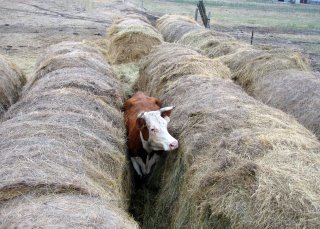 Here’s something you don’t see very often. This cow had broken down the fence enclosing our (precious) hay and in the process of chowing down and pressing forward for seemingly better and better tasting hay deeper in the rows, got itself stuck. Not being able to back out and not being able to turn around it only pushed further in and got more stuck. What a dilemma. Each of those rolls of hay weighs about 1200lbs and stacked together like that, there is no easy solution. If we could only get her to back out but not being able to turn around and then feeling a bale of hay sort of blocking her, she just knew she had to go forward. We tried all sorts of approaches to getting her out. But there were more problems than just her. 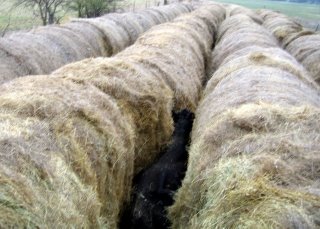 Yes, there was a bull involved also. That’s a Black Angus bull there (weighs about 2000 lbs) and he’s even more stuck than the cow. My goodness, doesn’t it figure that there’d be a boy and a girl involved in this mess? 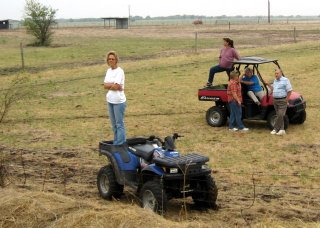 Naturally, a crisis of this nature, tends to stop down all other pursuits. The roundup came to a grinding halt, while my brother and I tried to figure out how to get this bull and cow out of trouble. We couldn’t be sure how long they had been stuck — maybe a day or two? They had to be thirsty if not hungry. That’s Diane trying to get a view of the action from atop her 4 Wheeler. No one want’s to get too close to the action because there’s a bull involved and he’s feisty and probably angry and anxious to get out of the situation. We’re just as interested in getting him out. 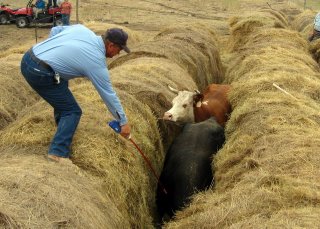 So my brother Steven finally resorts to the shocker to try to get them to just back out of there. We only resort to that tool if absolutely necessary. But they would just back up about 20 feet, feel the blockage and then bolt forward. 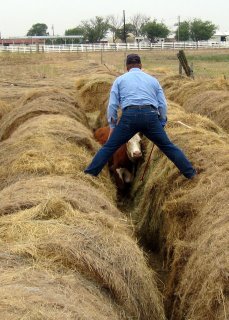 Steven is in a precarious position trying to convince that cow to move back. But her pal the bull as already moved past Steven in the opposite direction and she is not moving anywhere except forward to be close to him. If only they could see what we could. Freedom was only about 50 feet away but behind them. We were going to have to come up with another idea. We decided to get the tractor and remove all the bales of hay blocking the way and let them out. A time consuming job, but there didn’t seem to be any other alternative. But we had no idea what this bull would do and if I didn’t have pictures of it no one would believe it. But here’s the undoctored evidence: 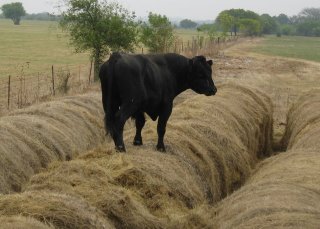 Yes, when the tractor started moving bales and making noises this bull barged forward even farther. I was wondering what he was going to do and worried about him also. There was simply no where to go and he was only getting in deeper trouble. He just needed to wait and soon he’d be totally free. Well why wait? This 2000lb animal got to the seeming end of the line and then decided the only way to go was UP! I could not believe my eyes as he clawed and scrapped his way up on top of these 5 foot tall bales (where I was standing). The bales are probably a foot taller than he is. Yet that is exactly what he did. I couldn’t think fast enough to get my camera out to get a photo of him scrambling out of the hole he was in, but you can see how he tore up that bale where he’s standing. 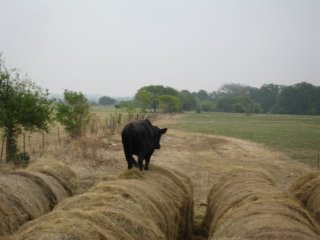 Now I had a whole different concern. Would he kill or injure himself trying to get down from here? Or would he turn in my direction? I figured I was more nimble than he on top of round bales of hay, so I wasn’t too concerned about that, but all prior assumptions had to be reevaluated in light of these unexpected developments! Well, he just walked to the end of this column of bales and simply let himself down sort of down the side of the bale. Simply AMAZING! Meanwhile, Steven got enough of the other bales moved at the other end of the column and the cow was finally able to turn around and remove herself quite readily. There’s bound to be a lesson in all of this that I could learn about human behaviour and how closely sometimes it seems to follow animal behaviour. We can be stubborn sometimes can’t we? And the way out of our predicaments, while not apparent to us, are quite apparent to others who would guide us and even prod us if necessary. 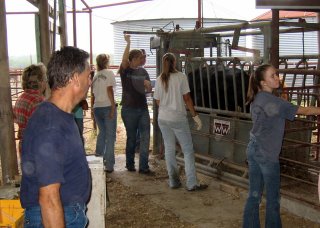 But now back to the work we set out to do. Round up the cattle and run them through the chute to tend to them and sort them. This can be done with a few people, but with a crowd it’s a whole lot of fun. 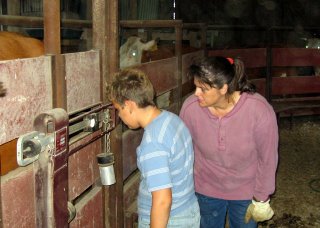 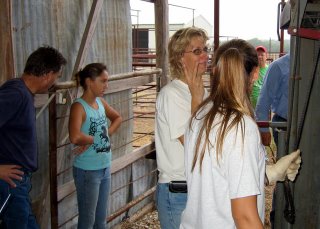 Diane supervises all action at the squeeze chute while my primary role is taking pictures. Ok, well that’s not all I do. I have primary responsibility for getting cattle sorted and loaded into the crowd alley. I’m good at that because I’m a cow whisperer. :-) 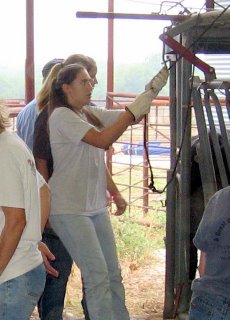 There’s Katie Corbran taking her shift at the squeeze chute. The cow comes in here and is restrained by this squeeze chute while we tend to it so that it doesn’t injure themself or us in the process. These cows realize that there’s nothing too scary involved and generally do not resist the process. The calves, on the other hand, are new to the process and have to be exposed to it a few time before they learn that it’s ok. 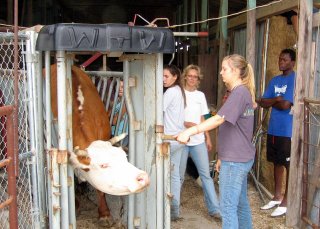 Rebecca is quite the expert at working cattle. That’s Maji (sp?) in the background, a friend of the Corbrans from ______, Africa who was a great help to me in sorting cattle. 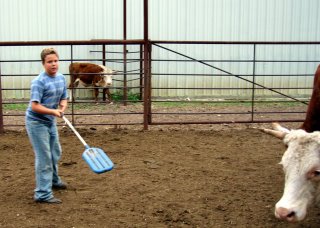 Here’s Russell with the rattle pattle. It makes an annoying rattle sound that the cattle generally want to step away from. Bulls pay it no mind. 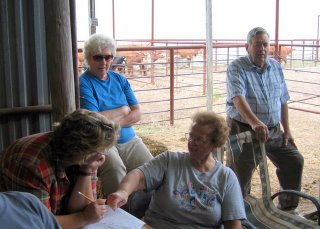 Aunt Donna, Uncle Norrie in the back observing the action along with my Mom and sister Cheryl who is performing record keeping activities. Cheryl is much more likely to get right in to the middle of things compared to Evelyn. 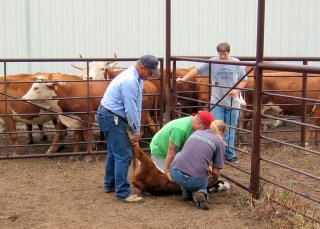 This is a joint effort of Gary Clark, Rebecca, and Steve with Eric looking on catching a young male calf and “banding” him. This young bull calf is probably a couple of weeks old, but even a few days old they are very strong and difficult to just catch like this. You really need roping skills, and we don’t have that yet :-) Until then, we use the team method.

One thought on “It Takes a Village”