I had wanted to write about the Homecoming parade and the surrounding events but I couldn’t find the pictures from it. I just found them now. The Homecoming parade was in October 2006. Our assignment was to carry the 5th grade class taught by Mrs. Sessums (Russell’s in that class). So we hitched up Sky and Sapphire and drove the wagonette down to the school where the kids were eagerly waiting. 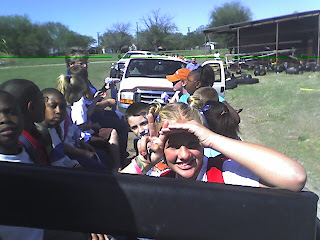 Mrs. Sessum’s class had made a banner which they attached to the wagonette. 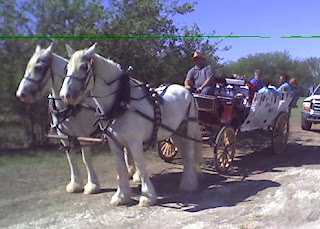 Everything went great on the ride from the school down to the center of downtown Milford where the city park is located. There we unloaded so the kids could attend the pep rally with all of the football players, the cheerleaders and the band. 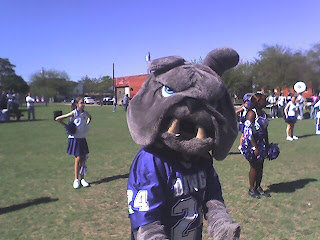 Rebecca is in the band and is also the mascot for the varsity football games. Yes, it’s the Milford Bulldogs! She says it gets mighty hot in that suit. I can see why. 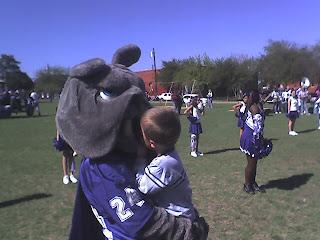 Noah is trying to see inside the Bulldog’s head and see if Rebecca is really inside there.
Eric is the lone tuba player in the band. 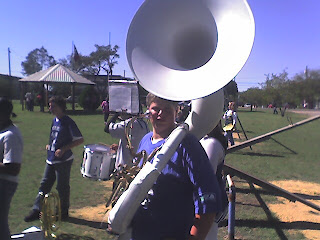 Well, the parade was great and the pep rally was fun. Then it was all over and time to head home. A few of our kids jumped in the wagonette and we were going head on home. Leaving the park, we went through a ditch which is not too big a deal, but coming out of it I noticed that the tongue (metal bar that you hitch up to the draft horses and is used to steer the wagonette — in other words, a crucial item) was now hanging at a wierd angle and the wagonette wasn’t steering right. On further examination I realized that the tongue had actually broken off the wagonette where it was welded to the steering (fifth wheel) mechanism.
Yikes!
We got the horses stopped and dismounted the wagonette with no disaster, but I had to call my brother back at the ranch to bring the welding truck into town so we could make an emergency repair. About 2 hours later we had it reasonably patched up and figured we could make it home (about 3 miles or so). I was glad that if the tongue had to break, it broke after the parade and while we were going slow and that no injuries had occurred.
After the repairs, we headed out once again. We got to within about a mile from the house and the tongue broke again. At this point I decided to just leave the wagonette parked at the side of the road and tow it in with a truck. 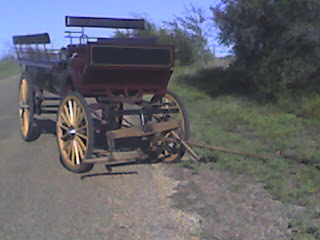 Diane came and picked up the kids in her car. The horses (and trusted companion Red of course) and I just walked home. 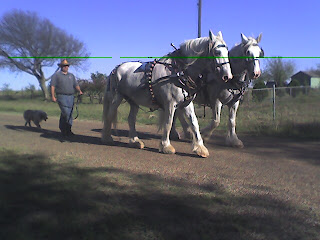 The long and winding road… 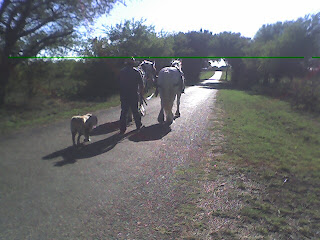 Now we have a new tongue that my brother made and the wagonette is working great. Another good lesson learned on something to examine before a parade.
www.SteakBurger.com
Grassfed Beef is Best

One thought on “Milford Homecoming Parade”