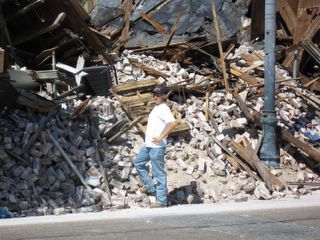 It had been 5 weeks since Hurricane Katrina caused such destruction to Louisiana and Mississippi, but help was still needed. The call came to us through Church channels and we were asked to pack some tents, sleeping bags and some chainsaws and other tools and go help the people in Louisiana. About 150 men from our Stake went and we joined about 3500 men down there from who had come from as far away as Dallas and Orlando, FL and probably beyond. Things had dried out a lot, but what was left in the wake of the Hurricane is staggering in its scope. It took us about 10 hours to get there, so we didn’t arrive on the scene until 11:30PM Friday night. We set up our tent on the Church lawn along with hundreds of other tents and bedded down. Up at 6:30AM and on our way to assigned houses and apartments in crews of 10 by 7:30AM. We worked all day (what a beautiful day it was weather-wise too) up to 6:00PM. We had some Supper and took a shower in the makeshift (but so nice, considering) outdoor showers and hit the sack again. A quick church service was held the next morning at 7:30AM and we set out to work again. Finishing at about Noon on Sunday, we packed up and headed back home arriving at about 10:30PM. We were exhausted but couldn’t have felt any better knowing we were able to contribute at least a small part to helping those who have suffered so much loss.

At lunchtime on Saturday, we took a ride through downtown New Orleans. It really is coming back to life and isn’t as bad as it seems just watching it on TV. 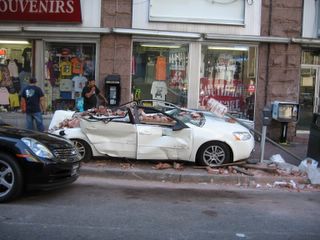 Here’s a picture of a car that was smashed and sitting on a main street in downtown New Orleans. 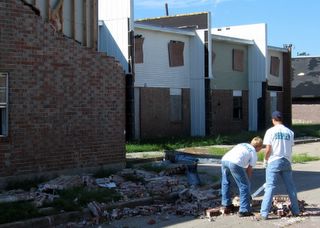 Part of this apartment building had collapsed. This was not an unusual site to see where we were. 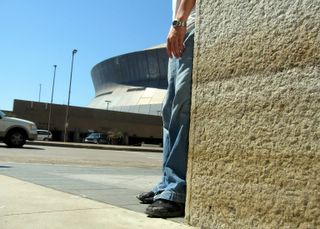 Here is the Superdome in the background across the street. Notice the water line created by the flood waters near the Dome. 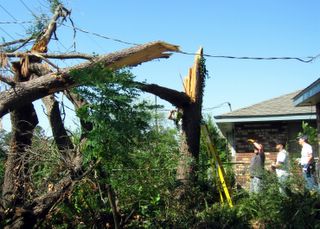 It’s amazing that these large trees that were snapped by the hurricane force winds fell only in the backyard of this house and not right onto it like happened to many other houses in that neighborhood. In a few hours we had this place cleaned up real nice. 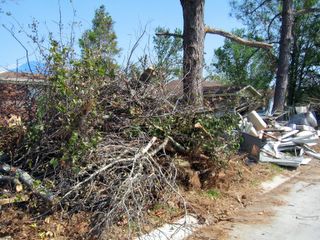 Above is the result of a cleanup job done on a different (but just one) house that got flooded and was heavily damaged by wind.

One thought on “Sometimes You Just Have to Pitch In”