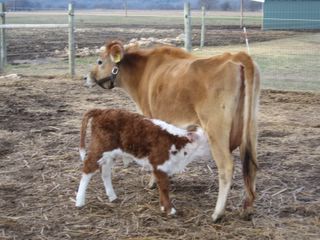 Well this baby hereford bull calf was born to a Hereford mama a few days before this picture was taken, but the mama never recovered leaving this orphaned calf. We had to feed the calf ourselves by bottle for a few days but then decided to see if Sugar would adopt him. After a few hours of him chasing her around the corral, she took him under her udder. What a nice girl that Sugar is.

We sacrificed about a gallon of milk a day in production, but we would separate him at night and milk Sugar in the morning. We still had plenty of milk for our own use and the real nice thing was we could just leave the calf on her on Saturday night and not have to milk on Sundays! Hey now, that’s a pretty good plan.