That’s what the boys kept saying anyway. And I have to admit, it certainly has to rank with one of the best. Not that we did anything all that spectacular, but that’s what so great about kids, it really doesn’t take that much to impress them. Just a little time. And spending a little time with them was just what I needed also. Win-win. It’s been Spring Break for us this week and Ryan was going to be gone with a group from Church down to Big Bend National Park for a hiking/camping trip. Eric was going camping Friday night with the Boy Scout troop and Diane and Rebecca were going to head out to Stephenville for a horse show and Thursday, Friday and Sat. Diane was even planning to show a horse for the first time in a long time. I decided I’d take the remaining little boys and go on a camping trip of our own. Fortunately for me, these guys are easy to please. All we had to do was get out the camper and head a whole 1.5 miles down to The Lake. As D-day drew near, the excitement mounted. Finally, Thursday arrived and we got everything loaded up. 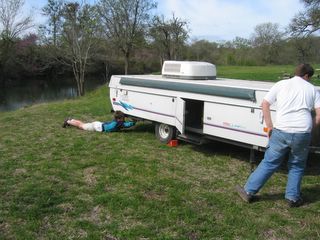 We hauled the trailer down to the lake. Getting it all set up is half the fun. 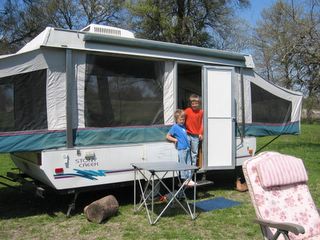 It’s all set up, now it’s time to get busy fishing, hiking and roasting marshmallows. This picture was taken at about noon, and the boys are so excited about having the camper set up, that they want to go to bed now. I have to set a rule of no going in the camper until it’s dark. Hehe. Little boys and camping. It just doesn’t get any better.

You’re not camping if you’re not hiking.
I’m not a big hiker, but you just have to go on some sort of a hike when you’re camping. And you need to take some “bird feed” along with you. When I was a kid, my Mom’s bird feed was a mixture of raisins, dry cereal, M&M’s and peanuts. That was good stuff. We had some bird feed of our own on this hike. But it wasn’t that elaborate. It was a bag of Reese’s Pieces Easter Eggs. Got that from Diane’s Easter stash. 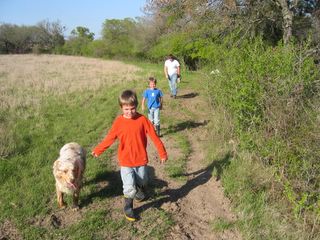 We can do a good 2 mile hike through the creeks and “canyons”. 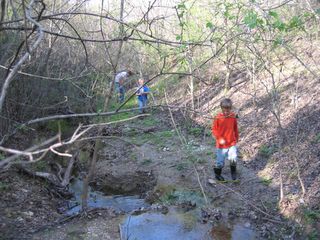 Down to the creek we go. 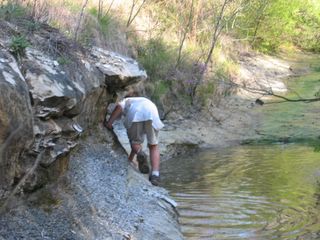 I told Russell he wouldn’t be able to get through this tight spot. It only motivated him more. Exactly. 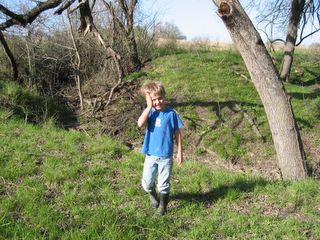 “Whoowee! This hike is wearing me out.”

Hike’s Over. Let’s find something else to do. 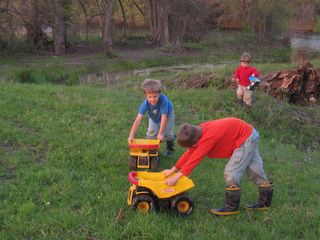 I love these trucks. The little boys can push them around all day. Now all they need is some mud. And mud is always close by. These guys go through so many socks, we must be keeping some sock manufacturer in business somewhere — probably in China. 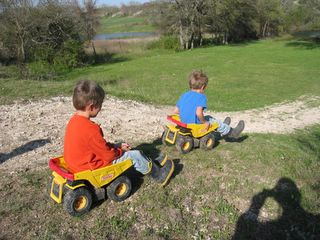 Ahh, now this looks like it could be fun. I wanted to try riding these things myself, but I’m afraid I would have needed both trucks.

Robbie and Peter had a ball riding these trucks down this hill. They tried it backwards and forwards. Here’s a picture of Robbie: 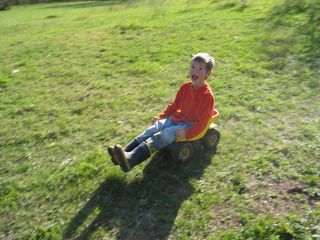 This is one of my favorite shots of Robbie going full speed down the hill and loving every minute.

Later on Diane and Rebecca came down to check on us and they couldn’t resist trying the trucks themselves. Here’s some pictures they’re going to kill me for putting up here, but only I have the password, so here goes. 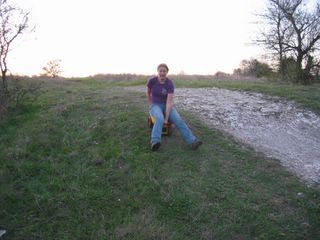 It’s hard to tell from this photo, but this little hill is pretty steep and bouncy. It can send you flying. 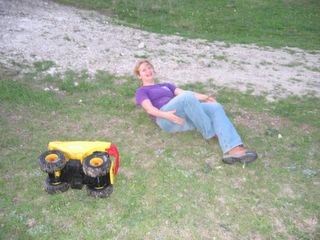 See what I mean?

And check out Rebecca’s face in this next picture if you want to know if it’s a little scary. 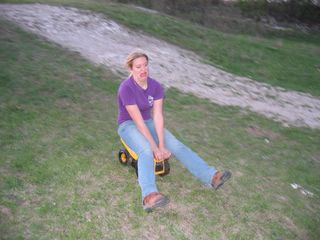 Even Diane thought it looked like fun. And so she dived on in. That’s what makes Diane great — spontaneity, baby, spontaneity. 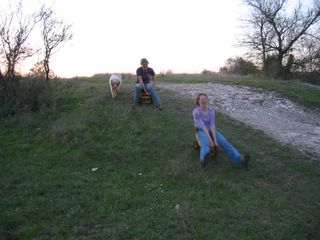 Time for Some Fire

Standing around a fire and poking a stick in it and watching it glow can consume hours of time at any campout. Things were no different at this campout. Here’s Russell getting in some early marshmallow roasting. 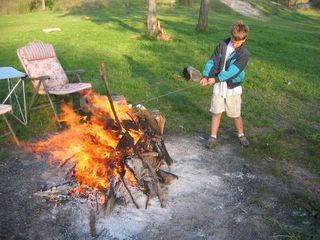 That’s a hot fire, but roasting marshmallows is a big part of any campout, even if i’ts not quite dark yet.

At least on the campouts I’ve been on, it seems like all we do is cook, eat, clean up and start cooking again in a never ending cycle. Maybe that’s why I like camping so much. But with just me and 4 little boys, it seemed more like cooking and cleaning up with no time to eat. No wonder Diane never gains weight! 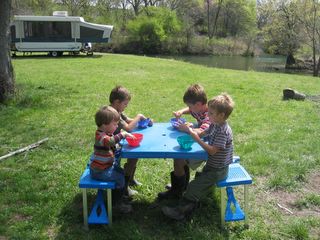 Chow time. That table is on its last legs, but it’s still hanging in there.

Time for Some Target Progress 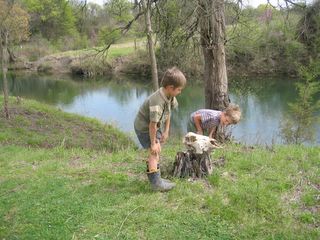 We set this cow skulll up for some target practice with the .22. We have a number of guns. And we get the guns out of the gun safe occasionally and have a gun saftey lesson. The boys can learn a good lesson about how destructive even .22 bullets can be. It’s best to take the mystery out of guns so they can have a healthy respect for what they can do.

That about wraps up this Post. Man, it took longer to write this and get it posted than the whole campout took, almost. Anyway, we got poured on all night Friday night. A thunderstorm came through and shook us up pretty good. I had visions of being blown into the lake. But the dawn finally arrived and we were none the worse for wear. Then it just kept raining on us trying to pack up. Oh my, the joys of camping.

2 thoughts on “"The Best Campout Ever"”