We spent a lot of hours working on this geodesic dome structure that was to be the Chicken Dome. I came up with an ingenious method for attaching the tarps to the structure so that in any wind, it would not blow away. It was put on in layers and it was loose at the bottom of each layer. I can’t say I invented the method, because it was inspired by those umbrellas that don’t flop outward in a windstorm. We tested this method extensively before adding the final levels at the bottom. We had a number of fierce windstorms blow through and the dome performed flawlessly — it didn’t move an inch. So now it was time to add the final bottom layers and move the chickens into it. 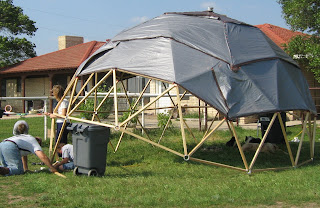 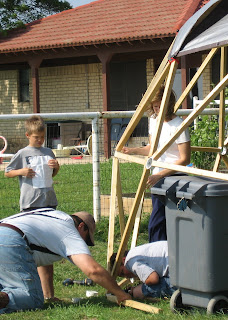 This was definitely a family affair. No telling how many hours were spent on this project. If I had hired it done, we would have no memories of working together to build it. 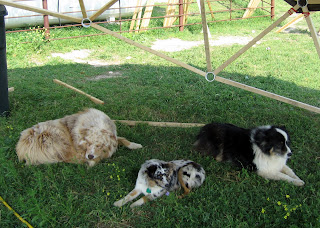 All the dogs enjoyed the shade while watching us work. Like my Dad always says: “I’m fascinated by work … I could watch it for hours.” 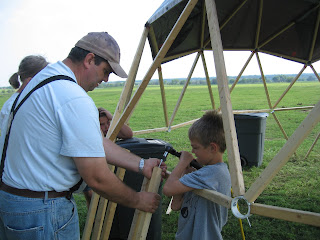 Robbie and I probably spent the most time working on this. We made a great team.