This Post is by Katie: We’ve had a few close calls with the puppies but they’re still alive and growing up. Last week I was shaving one our dogs in the barn and had left to get some scissors to cut some hair that the clippers couldn’t get through. In those ten minutes I was gone a baby skunk had made it’s way into the stall where we kept the puppies. When I walked in the puppies were barking and whining so I immediately went to check it out. There the horrible skunk was in their food dish and all the puppies huddled in a corner. I whipped them out of there after trying to get Mamma to go in there and do something, but she knew better than to mess with a skunk. After all the hussell and things were starting to calm down, I noticed that one of the puppies was bleeding. I took it to the vet and so far everything’s fine. They have really great personalities and are really friendly. You can already note some distinctive personality types. They’re 5 to 6 weeks old now. In a couple of weeks more they’ll be ready to be weaned and sold. 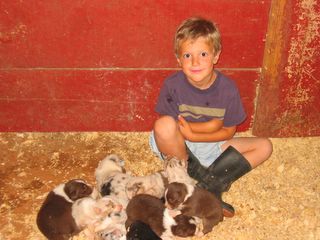 The puppies are making progress. This picture is when they were about 2 weeks old. It’s amazing how fast they grow up. We have 2 Blue Merles, 3 Red Merles, 3 Red Sables, and 1 Black Tri. 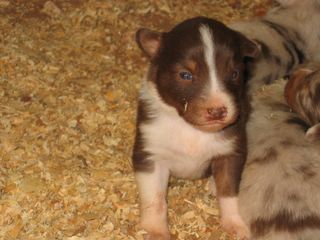 They’re still not as cute as they could be even though they’re still irresistible. The puppies in this picture are only now starting to see, sit up, and walk without falling down.

I was just bringing this puppy out from the house. After going to check on them in their stall I found this one caked in dirt, she was a mess. I’m still not completely sure what happened but I’m pretty confident that she fell into the water bucket and then climbed out again. I’m just glad I didn’t walk into that stall to find a drowned puppy. About a week later I had a bucket of water out there for Mamma. A little worried about how tall the puppies were getting, I stood there to make sure none of them could get inside. Lo and Behold, in about five minutes this puppy was in the water and struggling to get out. I’m glad I stayed there for a little while. Since then I haven’t kept a bucket of water where they could get into it. 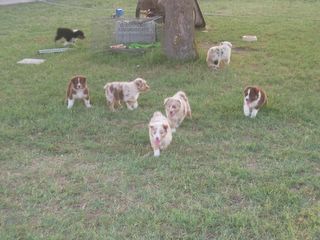 Here they are running around. They’re a big hit with any one who comes to visit. 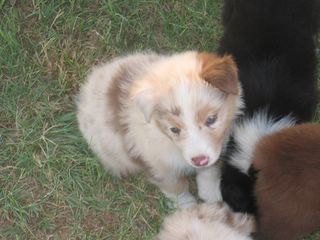 This is my favorite one. She has turned out to be very sweet. She has blue eyes and loves to just sit under your legs and be pet. If we were to keep any of them, I would want this one. 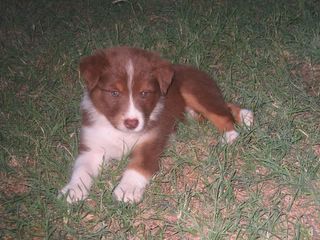 It’s not very often that you can catch any of the puppies being still, especially if you’re in view. 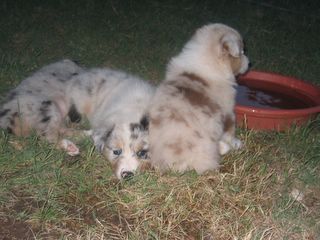 It’s getting pretty close to night time so they’re all going a little slower now. A lot of the puppies like to be near the water at all times. Some of them will climb into their bowl and lay down in it. Others like to lay under the faucets. 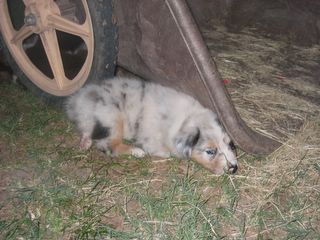 Every once in a while you can find almost all the nine puppies squishing themselves beneath this wheelbarrow. They tend to find the smallest space they can and then bury their head in it. They’ll squeeze under your legs if you’re sitting on the grass by them. It’s fun as long as you’re not planning to get up any time soon. 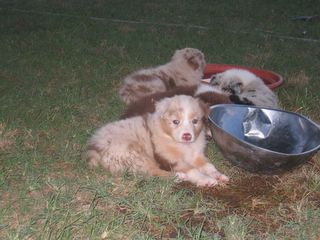 She’s about to climb into that metal bowl near her in this picture, she almost looks mischevious. 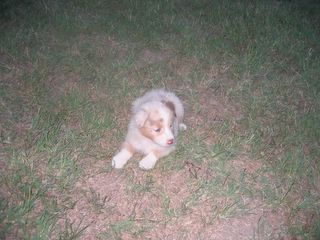 Here she is again just being her sweet self. 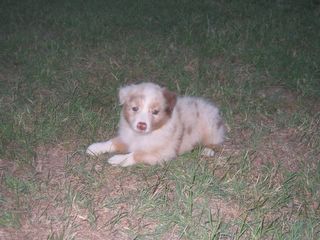 And here she is again, she’s finally looking at the camera after about a hundred tries. 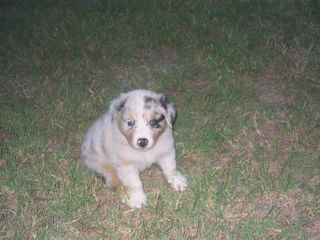 One of our blue merles. He has brown eyes even though I had hoped that at least one of our two blue merles would have blue eyes, guess not. The girl that looks a lot like him was the one that was attacked by that baby skunk. 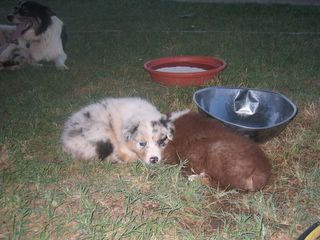 Here he is again laying next to one of his brothers. Mom’s in the backround keeping a tab on her puppies. 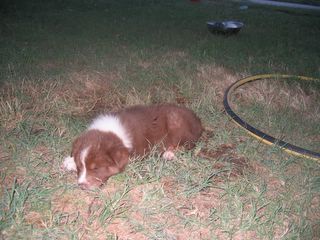 And lastly, the puppy that cannot stay out of the water to save her life. She’s really sweet too and can’t get enough attention. Maybe she’ll actually enjoy taking baths unlike our other dogs.

One thought on “The Puppies are Growing Up”