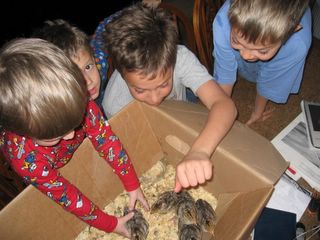 Well we did get some turkeys. Right now, we keep them in a box in the house to keep them warm. They were $7 a chick! Man, we’re in the wrong business! When they get their feathers and it warms up some more at night, then we’ll keep them outside. For now, though we’re putting up with the noise the make. Hopefully, the little boys won’t love (squeeze) them to death in the meantime. They have named them. It all started with Russell naming his favorite one “Turk”. Then we came up with Dirk (from the Dallas Mavericks), next we thought of “Jerk” as if Beef Jerky. We thought of “Work”, and “Zork” from Zurg in Toy Story. I thought of “Murk” just to come up with 5 names.

You might think by naming these it’s going to be hard to eat them when the time comes. Well, if they turn into to too much of individual pets, it might be difficult, but usually we don’t have that as too big of an issue with that. It’s all part of life.